I was watching the Maury show a few days ago and felt the need to speak my mind about what I saw. I have always been very opinionated when it comes to teens living a wild lifestyle, but today took the cake. 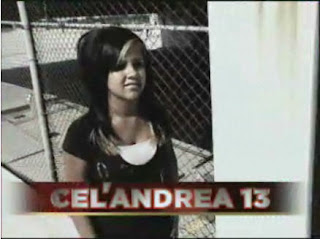 A 13 year old girl named Cel'Andrea that was sleeping with men, drinking, smoking weed and doing whatever. She came on the show to flaunt her slutish ways when Maury asked her an interesting question regarding who she admired. The teen's answer was SNOOKI, one of the members of . Are you serious??? She even had Snooki's famous poof and would actually look like a mini version of her.


So for those of you who have never seen the show Jersey Shore, it's an MTV reality show that has 8 housemates (4 male, 4 females) that basically spend their summer together while misbehaving all at the same time. There has been a lot of controversy on the show because of the fights, vulgarities, sex, tanning, Italian stereotypes and much more. Yet, was ranked #1 on MTV’s channel lineup for 3 seasons in a row (mind you, season 3 just started!).

I’m the first one to admit that I actually enjoy watching this show because you never know what to expect but at the same time, after watching the Maury show – I’m not sure this show is suitable for teens. I was actually very disappointed when listening to Cel’Andrea speak about how she admires Snooki. It made me wonder if all the antics they pull on the show had a major effect on her. Apparently, Cel’Andrea was a good kid but drastically changed within the last year (hmmm, coincidence?)

On , there is no surprise if you see people having sex (not literally, but you get the picture). The guys tend to always bring girls over after a long night of partying and sleep with a different girl every night. The girls who don’t make the cut are considered ‘grenades’. Some of the girls are as promiscuous and either sleep with one of their housemates or try to find a fling for the night.

A teen watching this show can easily believe that what is done on the show is okay for them to do as well. NOT! I know that many parents blame television for their teens’ violence or sexual orientation or sexual partners; yet I do believe that as a parent, you have the obligation to sit your teen down and have a talk with them. How do you expect your teen to progress in life if you let them do whatever they want? If you can't even sit down with your teen, you might as well just tell your teen 'Hey honey, you can sleep with as many partners as you want and drink & party every night - it's okay' - you're basically throwing in the towel and not even trying to be a responsible parent.

Ironically, a BBM (BlackBerry Messenger) contact of mine posted a picture today of some children dressed up like the cast and I felt the need to show you too. 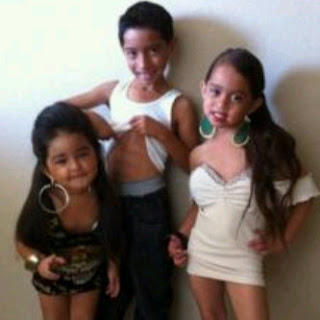 When I saw this picture, my first impression was “Where the hell are your parents?”….very disturbing picture. I then decided to visit the site where the picture came from to see what was the purpose of the picture and this is what it reads:

“Instead of contacting child services like a responsible adult, JWoww decided to retweet this photo of three young, impressionable children dressed up like the cast of Jersey Shore. Then again, I probably shouldn’t rule out that this is actually Snooki considering she looks to be about the same height. No, wait, that’s not cool. Now I’m abusing children by equating them with over-tanned slam-pigs. Is everyone seeing what this show is doing to us? This used to be such a kind, loving site. A family place.” – courtesy of bossip.com

All of this to say, is Jersey Shore a bad influence? In my opinion, it is! Even though MTV clearly shows a warning sign that it may not be suitable for certain ages, it won't stop many teens from watching the show. Common now, it's a trend on Twitter every now and then, so you know curiosity makes anybody want to see what the fuss is all about. I don't think the show should be banned but I do think MTV can do a better job at displaying certain scenes. I fully understand that MTV only cares about ratings but at the same time, they are also promoting an unhealthy lifestyle.

What's your opinion on this?
Posted by Sweetz at 4:49 PM

Sweetz
Montreal, Canada
I love analyzing people's behaviors, so writing has become a passion. I love writing about relationships, friendships, and much much more... I stay positive at all times, even through the bad, I believe good will come out of it.

My Older Posts (You know you want to read them! hehe)